Showing posts from March, 2009
Show all

March 18, 2009
With the Detroit, Toledo, and Milwaukee Roundhouse chapter completed, this blog, as far as I know, now includes every structure that stands (or stood) inside of Greenfield Village. But, that doesn't mean I am done with it - not by any means. My plans are to continue to up-date the information on the structures as more info becomes available. I also plan to add or switch photographs in other "chapters" when I am able to take better shots. As I wrote all of this out, I found that there are many great pictures awaiting to be taken! What will follow from here for future chapters will be on the different events that take place inside of the Village, including the Holiday Nights at Christmastime, Hallowe'en, the Civil War Remembrance weekend, and other specialties. I will also be writing about what takes place behind the scenes - the whys and wherefores that makes Greenfield Village more authentic in every historical sense and puts it far and away above other open-air muse
Post a Comment
Read more 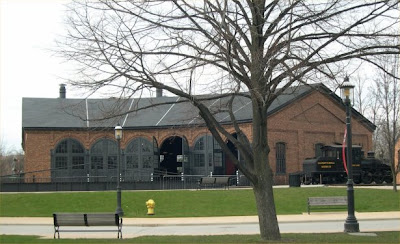 In June of 2000, the Detroit, Toledo, & Milwaukee Roundhouse officially opened. Originally located in Marshall, Michigan, the structure is the only working educational roundhouse in the midwest region, and one of only seven working roundhouses in the United States. The original DT&M Roundhouse was built in 1884 and was demolished in 1989. The reconstructed roundhouse has been restored to look as it did in 1920 and includes many of the structural elements of the original. Visitors can watch from above as skilled mechanics service and repair the locomotives using 19th and early 20th century equipment and tools. That being said, this roundhouse is also the primary facility for the inspection, care, repair, and storage of a number of historic locomotives. The trains at the Village, on an average, require one day of service for every day of operation. Notice the caboose restoration taking place In the old days, virtually all of the roundhouse workers were male and they would le
3 comments
Read more
More posts